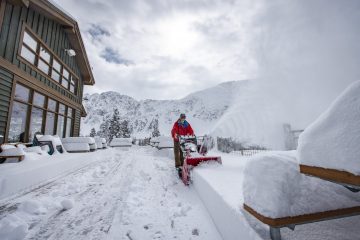 A huge snowstorm has brought over a foot of fresh late-May snowfall to the Rocky Mountains a week after several ski areas in the region ended their 21-22 seasons early due to poor snow conditions. Arapahoe Basin reported 16 inches (40cm) of fresh snowfall to start the weekend having staged a rail jam with skiers and boarders in T shirts and short a week ago.  A week ago... The wider region had also seen temperatures hitting 90F (32C) just 24 hours before the snowstorm arrived. Winter Park also had its Mary Jane slopes open in Colorado for the final day of the season on Saturday, also reporting 16” (40cm) of snowfall. A third area, Breckenridge, which had originally planned to

Just return from my first ski trip (4 days) to Seefeld, having spent many summer holidays there.

Seefeld has a reputation in the UK for being a small ski area with little to attract advanced skiers. For those who believe the tour operator blurb, l suggest you try the off-piste north face of the Haermelekopf to correct that misconception. It's tougher than the back side of Valluga and no Brits have heard of it! Simply awesome and a must but only with a guide!

The ski area is small but there is plenty to keep you from getting bored. The are two hills, firstly the much overlooked Gschwandtkopt which, whilst only having a vertical of 1,000 ft, has fantanstic undulating terrain which can catch you out if you're not concentrating. It's so good the Axel Lund-Swindel uses it for training. The World Cup is in nearby Garmisch. Better still, over half the hill has no artificial snow, so no ice just grippy powder when conditions are right. Ever better the hill is deserted on the Moesern and Reith sides. It really is millionaires skiing!

The Rosshutte is the other ski area and more akin to most Brits idea of the ski mountain with 3,000 ft vertical and a mixture of mostly reds and blues with two short and not to steep blacks.

Subsistance on the mountain is vey good value: Spag bog and half a litre of beer at the charming Hochegg Alm is only 9.70 euros. France take note!

Most people come to Seefeld for the winter walking and cross-country skiing; this makes the alpine skiing so much better as all the slopes are quiet, even at peak times.

We stayed at the excellent Hotel Schoenruh which is a 5 star hotel in all but name and managed by the excellent Christoph Gruber who cannot do enough for the guests. The Hotel is owned by the Kaltschmid family. It is one of a number of first class hotels they own in the resort, and affords exceptional value. Top rooms are exceptional and only 126 euros pp per night for threequarter board. You can only dream of these prices in France!

The town is genteel with apres-ski concentrated around the Fledermaus bar but with such a first class hotel it's largely irrelevant.

For someoine who is an Ischgl fan, Seefeld was a revelation, so much so we will repeat the trip next year.

Meanwhile, Ischgl beckons for a week of hard skiing and even harder apres-ski from 9 March. Haben du Ischgl uberlebt??!