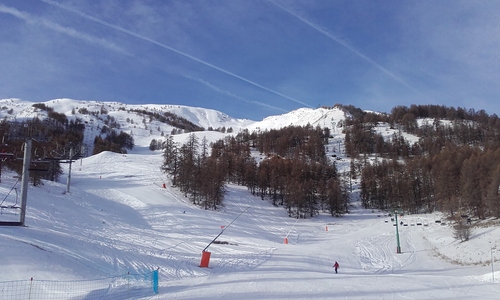 At the source of the Verdon, Val d’Allos – Le Seignus (Espace Lumière) is a large and sunny Haute-Provence resort. It can be tricky to reach from the north because the col d'Allos is closed from November until May. Val D'allos 1500 Le Seignus is part of the Espace Lumière ski area. Extensive skiing here, with a lot of steep off-piste above and through the trees. In addition, a lift pass may be bought that covers the l'Espace Lumière, which includes nearby Pra Loup. The skiing is above the village of Val D'allos 1500 Le Seignus, but a cable car links the ski resort with older, more traditional Val d'Allos 1400 village below.