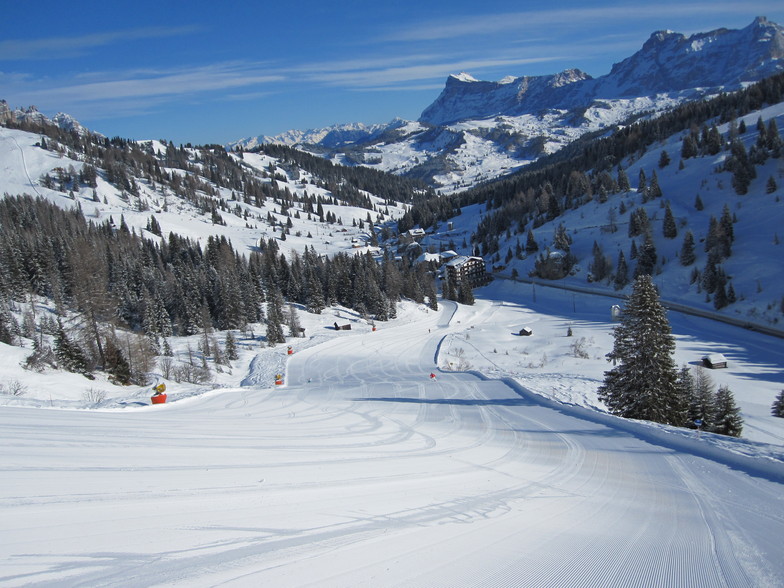 Verbier has completed its 2020-21 ski season and announced that next winter there’ll be a new Médran 1 gondola lift, nearly doubling uplift capacity on the route. “After 37 years of dedicated service, the Médran 1 lift has taken a well-deserved retirement. A brand-new installation will be built throughout this year, ready to welcome you in winter 2021–2022,” a statement from the Verbier 4Vallées team explains. The new lift will have large 10-seater cabins, the largest currently available for this type of lift. The extra space and speed of the lift will mean uplift capacity will reach 3,200 people per hour, compared to 1,800 today. As well as a new lift, the Médran and Les Ruinettes stations will be improved

We visited Arabba 10th to 17th January 2015 and had an absolutely fantastic week skiing. The resort is part of the enormous Dolomiti Superski area that has 1,200 km of pistes. The ski area is divided into 7 areas with the vast majority all linked up. We skied hard all week but only managed to ski in 3 of the 7 areas.

The huge attraction of Arabba is the spectacular Dolomites. The whole resort is within the UNESCO world heritage site; so beautiful. The skiing, in Arabba, best suits intermediate skiers with areas of more challenging slopes for the more adventurous. There is also the opportunity to ski around the Sella mountain. You can go around clockwise or anti-clockwise. The views and scenery were spectacular.

We booked the holiday with a superb small family business called Simply Dolomiti, run by Alice and Mogens Kristensen. They organised all transfers from the airport, accommodation & ski hire. Simply Dolomiti also provided, as part of the package, "Ski-guiding" around the extensive slopes. I was sceptical this would suit me and my family but it worked extremely well. There were two groups "the fast group" and the "less fast group". As a family we went into the most appropriate group to take account of the previous days exertions, both groups met up for lunch and coffee! Each group had a maximum of 8 or so people so it was a really good way of seeing areas of the resort that we may have missed and meeting other people.

We stayed in Evaldo Apartments right next to the chair lift. The accommodation was ideal for what we needed with great views of the Monte Burz piste.

Arabba is relatively quiet in the evenings but there is a wide variety of restaurants to suit all tastes. The high resort has a good snow record and it also has an extensive array of snow cannons with some on slopes as high as 2,000m. The pistes were great when we visited but off-piste was limited due to the early season lack of snow.

All in all, I highly recommend Arabba ski resort.